I'm So Excited That Tyreke Evans is a Memphis Tiger!

I'm So Excited That Tyreke Evans is a Memphis Tiger! Reelblack TV met with Chester B-ball phenom TYREKE EVANS, star of the new movie, Gunnin' For That #1 Spot. Directed by Adam Yauch of the Beastie Boys, it follows eight top-ranked High School Basketball players who are invited to play at the first ever "Elite 24" b-ball Tournament at Harlem's legendary Rucker Park. In theaters June 27. Visit www.gunninmovie.com for details.

Posted by Editor at 1:57 AM No comments:

Yes We Can! Senator Barack Obama can win in November!

Posted by Editor at 8:03 PM No comments:

Posted by Editor at 5:26 AM No comments:

Joey Dorsey is Ray Lewis With a Basketball!

Posted by Editor at 7:46 AM No comments:

Derrick Rose is the Man!

Derrick Rose is the Man!

Posted by Editor at 6:50 PM No comments:

Posted by Editor at 5:01 PM No comments:

Why are Black Preachers So Excited About Senator Barack Obama? 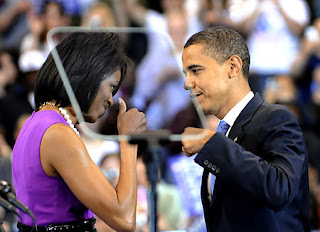 I feel like it is quite hypocritical for many in the Christian Media to attack black preachers for being excited about Senator Barack Obama. It would be entirely foolhardy for a group of people that has suffered oppression in this land, to not become excited about noticeable benchmarks of progression. Many of these noted black preachers are still the descendants of slaves. How could anyone deny their right to be excited about this moment in history?

The Religious Right and The Conservative Media are primed to send every black preacher that even acknowledges being excited about Barack Obama to Hell. They will ask how could a black preacher support a man that doesn't oppose abortion? I will acknowledge that most black preachers oppose abortion, but we also oppose the systemic mistreatment of many in our pews. How can so many in the Religious Right rally around abortion to such a great degree, but turn a deaf ear against crime and poverty in our inner cities?

How can we ardently fight so hard for babies that we can't see, while we neglect speaking out against policies that so adversely affect the millions of children that live in our inner cities? How can we rally so vehemently about abortion and gay marriage, but say nothing about mean-spirited policies that adversely affect our urban areas? I have no doubt that God opposes abortion, but he also opposes the mistreatment of the poor. As a member of a race that owns 1/2 of 1% of this nation's wealth, I will boldly state that something is wrong in this nation. It is time for a change in this land!

Are black preachers expecting Senator Barack Obama to be a Saviour of Sorts to Black America? No,we are not as a matter of fact we are not even expecting him to be a scaled down version of Moses either. However; his candidacy is refreshing and an inspiration to so many in our inner city areas. How could we not be excited in this moment? How could we not be excited about seeing a black man marching further than any other black man has? Let us enjoy our moment. Many in The Religious Right will call Senator Obama everything short of the Anti-Christ in the coming General Election. Many black preachers followed The Religious Right's Rallying Against Gay Marriage and Abortion and supported George Bush in 2004 only to reap one of the worst Presidential tenures ever endured by many of their members.

Yes, it is fair for a black preacher to be excited about the possibilities of a Modern Day Joseph Story playing out before our very eyes. It is not racist to acknowledge the great accomplishment of one's own. Why is it that black preachers can't stand up for policies that greatly affect their own communities? Are black preachers shallow because we don't share the same viewpoint as The Religious Right that God is a Republican? Black Preachers are excited about this moment in time. Don't attack us for appreciating great strides made by one of our own!

Pastor Stephen F. Smith
Posted by Editor at 4:34 AM No comments:

Would Penny Hardaway Have Been One of the NBA's Greatest Ever if He Didn't Have All of Those Injuries?

Would Penny Hardaway Have Been One of the NBA's Greatest Ever if He Didn't Have All of Those Injuries?

Watch Our Next President Assisting Flood Victims in Illinois!

Watch Our Next President Assisting Flood Victims in Illinois!

Is Senator Barack Obama Just an Inadequate Black Male? Can You Believe the Level of Anger This Hillary Clinton Supporter Has?

Is Senator Barack Obama Just an Inadequate Black Male? Can You Believe the Level of Anger This Hillary Clinton Supporter Has? Clinton supporter, Harriet Christian, angry after Rules & Bylaws committee meeting on Florida and Michigan. She called Senator Barack Obama an inadequate black male! It really sounded like she might have wanted to call him something else didn’t it? Senator Barack Obama will still win the presidential race despite her seemingly racist ramblings! Ms. Christian, Senator McCain will not be the next President of The United States!

Posted by Editor at 5:09 PM No comments:

The Next Level Group